When an  opponent declares, 'I will not come over to your side,' I say calmly, Your child belongs to us already...What are you? You will pass on. Your descendants, however, now stand in the new camp. In a short time they will know nothing but this new community.
- Adolf Hitler

Hitler's Youth:  The Intentional Brainwashing of a Generation 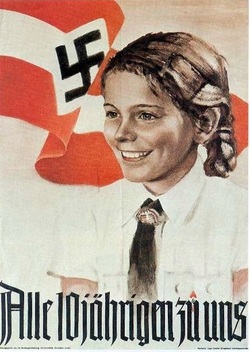 Early on, Adolf Hitler realized his legacy and Germany’s future rested on its youth. In fact, the importance of Germany’s youth was spelled out in his book, Mein Kampf. According to Mein Kampf, it was “…the nursery where the seeds had to be watered which were to spring up and form the future generation. The tactical objective of the fight was the winning over of the child, and it was to the child that the first rallying cry was addressed."9

With a blueprint in hand, the Hitlerjugend (HJ), or Hitler Youth, was established in 1926. Four years later and six months after Edeltraud's birth in 1930, the Nazi Party established a female counterpart, the Bund Deutscher Mädel (BDM), or League of German Girls. So it was that Germany's youth were politically indoctrinated at a time when Germany’s older citizens understood very little about National Socialism.10

In 1933, the female component of the HJ was further divided into two age-specific groups: the Jungmädel for girls ten to fourteen and the BDM for girls fourteen to eighteen. The HJ Law was later enacted in December 1936, making joining the HJ mandatory for German children between the ages of ten through eighteen. This ballooned membership. The HJ was used by Hitler and his party to surreptitiously advance National Socialist ideology.11

My most shocking Jungmädel duty was to help care for soldiers at Barbarossa Hospital, which was located on Barbarossa Platz, Berlin. I was fourteen; old enough to now attend the Pestalozzi-Fröbel-Haus, which trains young girls to become nursery school teachers. The school was a quick walk away from the hospital, which was probably why it was selected as a duty for us.
​
When I first saw the soldiers I was so scared. Inside my brain I screamed, “Oh, my God! Oh, my God!” They had no legs! They had no arms! I stood dumb struck at the entrance of the cavernous room in which they were kept. For a moment, I had no arms or legs. I was in shock. This wasn’t real! My instinct was to turn around and run, get away as quickly as possible so I could forget this place existed. I almost did, but a kind nurse noticed my reaction. She slowly walked up to me as if I were some startled fear frozen animal. She knew exactly what I was thinking, so she softly said, “They need your help.” Somehow her gentle voice and those few words, made so potent by their honest description of such a gruesome situation, got through to me. I calmed myself and overcame my panic.

When I went home and told my mother about what I had seen, she didn’t want me to return. I had no choice, however. This was an assigned HJ duty. More importantly, I believed that nurse – those soldiers needed my help! They deserved whatever I could do for them. Maybe death wasn’t the ultimate sacrifice for one’s people and country?