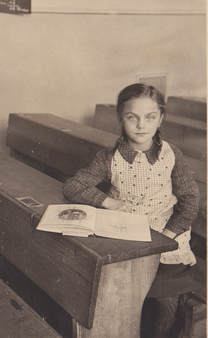 Edeltraud, Abt. Age 8
I begin with the young. We older ones are used up. We are rotten to the marrow. We are cowardly and sentimental. We are bearing the burden of a humiliating past and have in our blood the dull recollection of serfdom and servility. But my magnificent youngsters! Are there any finer ones in the world?...With them, I can make a new world.
—Adolf Hitler

Edeltraud was born in Fellhammer, Silesia, Germany, in 1930, but spent most of her formative years growing up in Berlin, Germany. Edeltraud's serene and idyllic childhood was interrupted when she and her parents were forced to leave a prosperous bakery business, friends, and family in Silesia after her father refused to join the Nazi Party. She and her parents moved to Berlin in 1939, where her father was conscripted into the German Regular Army. By law, she joined the Hitler Youth in 1940 when she turned 10 years old.

At the start of World War II, she was in Berlin, the epicenter of it all. This was Adolf Hitler’s capital and, after hundreds of Allied bombing missions, where the war in Europe would culminate as, street-by-street, Berlin was captured by brutal Russian soldiers bent on revenge. Edeltraud managed to live through it all experiencing and witnessing starvation, deprivation, destruction, and death.

She was later educated as a nursery schoolteacher at the world renowned Pestalozzi-Fröbel-Haus, graduating in 1949. She met her future husband, an American soldier, in Berlin four years after World War II ended. She first came to the United States with her husband in 1952. An Army wife for 30 years, she traveled extensively, raising four children along the way. She earned her U.S. citizenship in 1963, and later resided in Huntsville, AL until her death in 2018.14 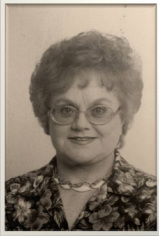 Edeltraud, Age 55
I am now in my eighties, surprised at the face that greets me in the mirror each morning. Part of me remains young, always reaching for the child that is still inside; that child and I still speak every day, but never really touch...too many years have passed...too many horrors. I want to forget, but I shall not. I remember everything that happened over my lifetime – my teachers, my friends and family...I especially remember those who did not survive the war. Even now, nightmares still awaken me, ghastly faces of the dead choking me from my sleep.2

This is the story of my childhood in Silesia and adolescent years in Berlin, Germany, where I was raised in the shadow of Adolf Hitler’s Third Reich, the madness of World War II, and the years that followed. I survive today through the grace of God, and I am determined to finally share my story before everything is forgotten – before the past is buried and no one remembers the ugliness of a world at war.3