The Bombing of My Home in Berlin, Hitler's Capital

I think it is well for the man in the street to realize that there is no power on earth that can protect him from being bombed. Whatever people may tell him, the bomber will always get through. The only defense is in offense, which means that you have to kill more women and children more quickly than the enemy if you want to save yourselves.
—Stanley Baldwin, House of Commons, 1932
The first British air raid on Berlin, Germany's largest city, took place in August 1940. A year later, the Red Air Force dropped its first bombs on the city. The Americans joined the bombing fray in March 1944. The Allies (Britain, US, and Russia) launched a total of 363 air raids against Berlin during WWII. The radar used at the time was very primitive, especially in cloud-covered areas, so area (carpet) bombing was necessary to take out most targets. This obviously resulted in massive collateral damage, which was more than acceptable since the German people themselves were considered targets as part of the Allies’ strategy to weaken the people’s morale.14

B-17 Flying Fortresses of the U.S. Army 8th Air Force Over Berlin 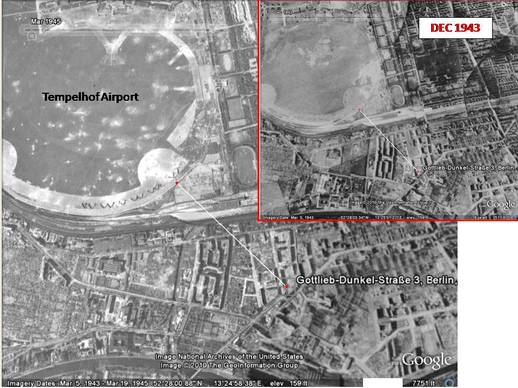 
I lived on Gottlieb-Dunkel-Strasse 3, in the Tempelhof district of Berlin, which was near the airport. If you go to GoogleEarth and pull imagery of the Tempelhof Airport area (the earliest is dated December 1943) and compare it with the next historical image of the same area dated March 1945, there is  a significant difference. In the 1945 image, you can see craters everywhere.15
Although the number of Berliners killed by the bombings varies, it is estimated that between 25,000 to 50,000 died and 100,000 were wounded. By the end of the war, an estimated 600,000 German civilians lost their lives in the bombing campaign against the Third Reich. There were so many bombs dropped that dealing with unexploded ordnance became one of the other hazards the people had to worry about.16 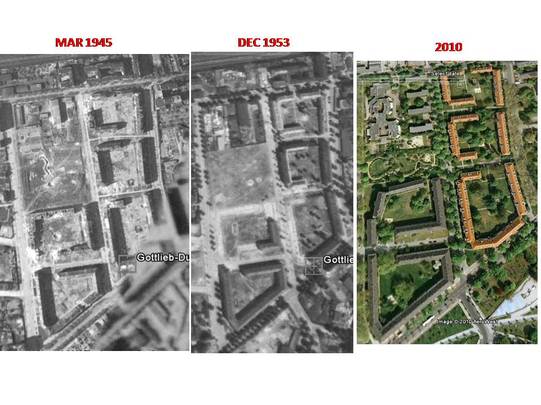 GoogleEarth imagery of my Tempelhof  apartment complex. The extensive damage done to our apartment and surrounding area is clearly visible in the March 1945 image. Entire sections of our apartment complex were wiped out – almost seventy percent. As providence would have it, we lived in the thirty percent that wasn’t destroyed.17