German Silesia - A Land that Ceased to Exist 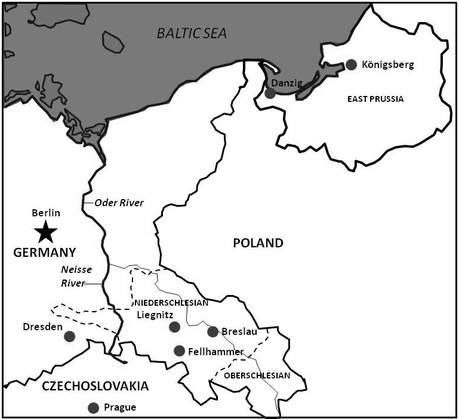 Germany’s Pre-War Provinces of Niederschlesian (Lower Silesia) and Oberschlesian (Upper Silesia) (Map by Cindy Rodriguez)
Silesia was a magical place, beautiful beyond words. It was filled with gentle rolling hills, large fields, and wild forested lands. With tiny groups of houses clinging to the hillsides, some of the views were breath-taking. Historically, the province was part of Prussia until Prussia united under the German Empire in 1871. German Silesia even had its own language, Schlesisch, which is almost extinct today. In 1919, Silesia was divided into Upper Silesia (Oberschlesien) and Lower Silesia (Niederschlesien) with Breslau remaining the chief city.4 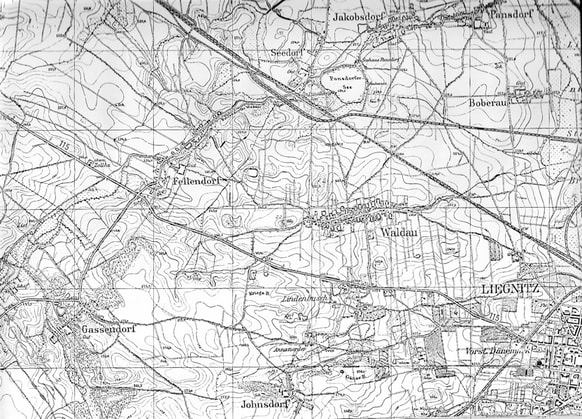 An old map showing the location of Fellendorf (Fellendorf Collection) 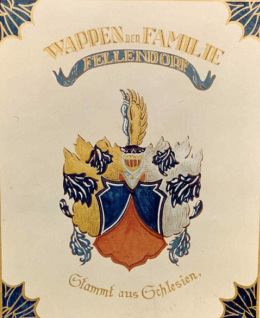 Of my Fellendorf ancestry, I can tell you that we were once nobility with our own castle and crest. Our name originated from the town Feldorf, which later became Fellendorf, located near Liegnitz, Niederschlesien, just north of where I was born in Fellhammer. I was told by my parents that we held the title of Count/Countess. We used to have a lot of land and riches. Our title was sold along with everything else by a wayward family member sometime in the 1800s to pay off gambling debts. My parents actually stumbled upon the castle’s ruins while hiking with family near Liegnitz; to learn more, they were told to see the local priest, who relayed some of the aforementioned history behind our family’s name.5

The End of Fellhammer, Silesia 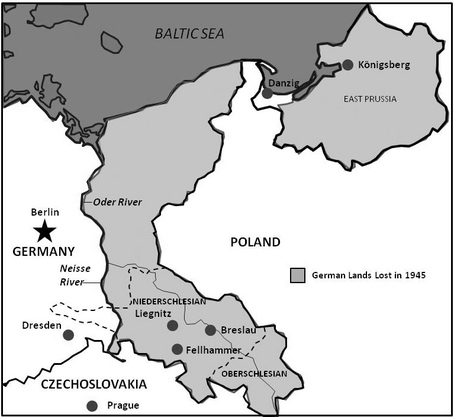 German Lands Lost After the War (Map by Cindy Rodriguez)
When someone asks me where I’m from, I always say Berlin; sadly, the place where I was born, Fellhammer, Silesia, doesn't really exist anymore. Silesia's future was originally brought up at the Yalta Conference in February 1945, when the Big Three (President Franklin D. Roosevelt, Prime Minister Winston Churchill, and General Secretary Joseph Stalin) met to discuss the end of WWII. Because of Russia's key role in the war and the damage Germany had exacted upon his countrymen, Stalin expected many concessions at this conference. Already secretly thinking of expanding his Communist empire westward, Stalin insisted Silesia be turned over to Poland. He had great plans for Poland. He wanted Poland to be a trusted Communist nation, a buffer to better secure Russia’s flanks. By this time, Roosevelt was very ill and conceded pretty much everything to Stalin. Churchill, staunchly loyal to Roosevelt, reluctantly agreed despite his great dislike of Stalin. Silesia's fate was later sealed at the Potsdam Conference in July through August 1945. The conference was held after Roosevelt’s death, and Harry Truman, who succeeded the president, reaffirmed the change in Silesia's borders.

After the war, most of Silesia reverted to Poland, and ethnic Germans in Silesia were forced out of their homes and off their lands. Even the names of  the towns were erased as new ones were selected in Polish. My beloved Fellhammer became Sil Kuznice Swidnickie. Waldenburg, the larger town just to the east of Fellhammer, became Walbrzych. Most of my relatives in Silesia relocated to Gera (Thürigen, Germany) and the Rheinland Moers.6